March featured a number of anomalous extreme weather events such as the floods in portions of Egypt and New Zealand, a freak hailstorm in Asmara, Eritrea, RECORD warmth in much of Europe, severe cold and snow in the eastern half of the U.S. and heavy rainfall in the Pacific Northwest that culminated in a deadly landslide in Washington. Globally (land-ocean temperature index), it was the 4th warmest March on record (since 1880).

NORTH AMERICA – It was a long cold month for the eastern and midwestern U.S. with temperatures averaging 7°-10°F (4°-7°C) below normal. In fact, it was the coldest March on RECORD for Vermont and 2nd coldest for Maine and New Hampshire. A blizzard pounded Cape Cod and Nantucket on March 26th where wind gusts reached 83 mph and 10” (25 cm) of snow fell.

Ice coverage on Lakes Michigan and Superior reached their 2nd greatest extent since comprehensive records for such began in 1973. In the West a series of wet storms pounded Washington State resulting in a tragic landslide in the town of Oso where at least 35-40 people died. The airport in Seattle measured 9.44” (240 mm) of precipitation; a March RECORD for the site and Portland, Oregon measured 7.52” (191 mm) for its 2nd wettest March. On the other hand, no precipitation was measured in Las Vegas, Nevada tying with six other March’s for the driest such. Drought conditions worsened in the southern Plains and Southwest. Alaska has gotten off to its 3rd warmest start to the year and in Barrow it was the 3rd warmest March since records began there in 1921.

SOUTH AMERICA and CENTRAL AMERICA – Following the extreme rainfall in Asuncion, Paraguay on February 27th, more extreme rainfall deluged the country between March 14-18. EUROPE – March was the warmest such on RECORD for Germany and many other locations in Europe. In Germany the March average temperature was 7.0°C (12.6°F) above normal beating out the March’s of 2012 and 1989, the POR going back to 1881. The temperature peaked at 24.1°C (75.4°F) at Sachsenheim on March 20th and the coldest temperature observed in the country during the entire month was a relatively mild -8.6°C (16.5°F) at Oberstdorf on March 26th.

Record March heat was observed at many locations across the continent including 19.8°C (67.6°F) in Moscow. In the U.K. it was also warmer than normal (1.2°C/2.2°F above average) but not on the scale observed in other parts of Europe. Precipitation ran at 85% of the long-term average.

AFRICA – A freak hailstorm battered Asmara, Eritrea on March 12th. Hail drifts some one meter thick accumulated in downtown Asmara. Also of note was the exceptional rainstorm that deluged portions of the Upper Nile in Egypt on March 9-10. Luxor picked up 30 mm (1.18”) during the event. It’s average annual rainfall is just a little over 1 mm (.04”).

The Comoros Islands came within 0.1°C of setting it’s all-time national heat RECORD on March 23rd when a temperature of 35.5°C (95.9°F) was observed at Grande Comore Airport.

ASIA – Torrential rainfall pounded southern China and Hong Kong on March 30th with 174 mm (6.85”) measured in 24 hours at Guangzhou (Canton). The Kashmir of India and Pakistan experienced a tremendous snowfall on March 10-12 with Srinagar, India picking up 211 mm (8.31”) of melted precipitation and the snowfall ranging from 25-60 cm (10-25”) in and around the city. Avalanches resulted in the deaths of at least 16 and injured 30 in the region.

AUSTRALIA – March was warmer than average overall and the 7th warmest on record for Western Australia. Precipitation was 34% below the long-term average nation-wide although some extreme rain events resulted in flash floods in parts of Queensland and New South Wales. A two-day rainfall of 557 mm (21.93”) was measured at Pacific Heights in Yeppoon, Queensland on March 27-28.

NEW ZEALAND – A terrific storm, said to be the worst in 40 years, battered Christchurch, South Island on March 3-5. Flooding in Christchurch followed the storm which dropped 100-150 mm (4”-6”) of rain on the city in just 24 hours.

Precipitation was low again (50% of normal) for most of the North Island following a dry February. Many locations ranked in their top three for driest March on record. Hamilton experienced its second driest March on record with only 6 mm (0.24”) of rain (POR 1935, 7%), and Palmerston North had 9 mm (0.35”), driest on RECORD for March (POR 1928, 14%). The South Island was drier on the western side and wetter in the east and south.

ANTARCTICA – The coldest temperature in the southern hemisphere and the world during March was –74.5C (-102.1°F) recorded at Dome A on March 22nd. This was close to the coldest March temperature ever measured in Antarctica during a March which was -76.1°C (-104.1°) at Ago 4 site some years ago.

With all of Valparaiso under military rule early Tuesday, 5,000 firefighters, police, forest rangers, soldiers, sailors and civil defence workers joined in a mammoth fight against wildfires licking around the hilltop shantytowns of this picturesque port city as the disaster entered its fifth day.

Helicopters and aeroplanes dropped water on the flames and smouldering ruins of some of the poor neighbourhoods throughout Monday, the third day since flames first erupted in a forested ravine on the outskirts of Valparaiso and then were quickly spread by strong winds that scattered glowing embers into slums.

An estimated 11,000 people were homeless as the toll of destroyed homes rose to more than 2,500. A contingent of sailors in riot gear stood ready to evacuate 700 more families whose homes could be lost if the winds shifted.

The fires have been so hot they created their own fierce winds, spreading flames that consumed a few entire neighbourhoods of ramshackle housing. Homes stood unscathed in other districts but remained in danger from the embers being whipped through the air.

Valparaiso is an oceanside city of 250,000 people surrounded by 42 ills that form a natural amphitheatre. The compact downtown includes Chile’s congress and its second-largest port, and the city owes its status as a Unesco World Heritage Site to the colourful homes built on slopes so steep that many people commute using stairs and cable cars. 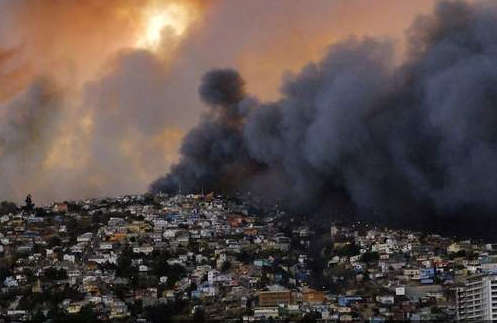 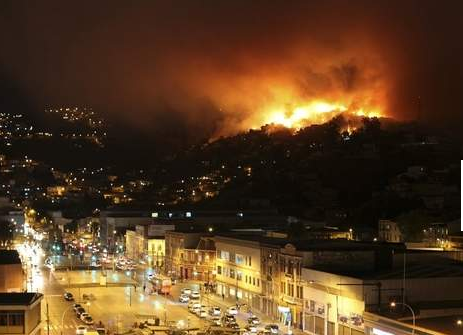 Tongan health authorities say there’s been an outbreak of the mosquito-borne chikungunya virus affecting more than 10,000 people across the country.

It’s the first time Tonga has had an outbreak of the virus, which causes acute fever and joint pain.