USA – Severe storms loom across central US this weekend – Forecasters are predicting a significant chance of strong tornadoes this weekend across a large part of the central U.S.

Wild storks observed nesting in eastern England could be the first pair to breed in Britain for nearly 600 years.

The BBC reports the birds are nesting on a chimney at Norfolk’s Thrigby Hall Wildlife Gardens, near Great Yarmouth, and are engaging in mating rituals.

The last stork to be documented breeding in Britain was at St. Giles’ Cathedral in Edinburgh, back in 1416.

Conservation efforts elsewhere in Northern Europe have resulted in a modest return of the birds, which now appear to have ventured across the North Sea to raise a proper English brood.

“We gave the storks a helping hand by building a structure for their nest on the hall’s front chimney,” said Ken Sims, director of the wildlife gardens. ”But they turned their back on our handiwork and have built their own nest on one of the rear stacks.”

Sims said the gardens had been trying to get storks to nest there for many years.

The storks nest in North Africa, across Europe and into Asia. They are known throughout the world as a symbol of fertility. 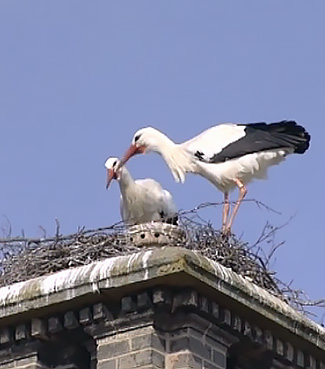 Dolphins apparently use sponges as tools to snag food they could not otherwise grab.

This is the first direct evidence that dolphins can use tools to carve out unique places in the food chain.

Dolphins are often ranked among the smartest members of the animal kingdom. They engage in complex forms of communication, may recognize themselves in mirrors, can understand sign language, and can learn to poke an underwater keyboard to request toys to play with.

On 23, 20 and 17 April 2014, the National Health and Family Planning Commission (NHFPC) of China notified WHO of 6 additional laboratory-confirmed cases of human infection with avian influenza A(H7N9) virus.

Measles has infected 129 people in 13 states so far this year, the most in the first four months of any year since 1996, officials from the Centres for Disease Control and Prevention reported Thursday.

Reventador (Ecuador): A new phase of intense activity with possible lava fountains and new lava flows began at the volcano yesterday. Over the past weeks, the volcano had been in a state of mild intermittent strombolian explosions, but experienced a rapid increase in activity yesterday after around 15:00 local time. Infrared webcam images (collected by Culture Volcan) suggest that a phase of lava fountaining or much stronger strombolian explosions took place. The apparent surge in lava emission also seems to have produced a new lava flow about 3-400 m long. This increase in activity is clearly visible in the corresponding seismic signal and likely continues at the moment.

Tungurahua (Ecuador): While surface activity has been fluctuating at generally low levels with only sporadic small steam and ash emissions, IGPEN reports that there are signs that suggest that a new batch of magma might be on its way to the surface. During the past days, there had only been sporadic steam emissions of up to 500 m height and 3 small ash explosions on 22 April with no explosion sounds and ash plumes not exceeding 2 km.