Flood- waters triggered more than 3,000 landslides across the Balkans on Sunday, laying waste to entire towns and villages and disturbing land mines left over from the region’s 1990s war, along with warning signs that marked the unexploded weapons.

The Balkans’ worst flooding since record keeping began forced tens of thousands of people from their homes and threatened to inundate Serbia’s main power plant, which supplies electricity to a third of the country and most of the capital, Belgrade.

Authorities organized a frenzied helicopter airlift to get terrified families to safety before the water swallowed up their homes. Many were plucked from rooftops.

Floodwaters receded Sunday in some locations, laying bare the full scale of the damage. Elsewhere, emergency management officials warned that the water would keep rising into Sunday night.

Three months’ worth of rain fell on the region in three days, producing the worst floods since rainfall measurements began 120 years ago. At least two dozen people have died, with more casualties expected.

The rain caused an estimated 2,100 landslides that covered roads, homes and whole villages throughout hilly Bosnia. Another 1,000 landslides were reported in neighboring Serbia.

The cities of Orasje and Brcko in northeast Bosnia, where the Sava River forms the natural border with Croatia, were in danger of being overwhelmed. Officials in Brcko ordered six villages to be evacuated.

More than a million people have been affected by the floods.

Without a boost from forest fire ash, warm summer temperatures couldn’t have melted nearly all of Greenland’s surface ice in 2012, a new study finds.

Soot from raging forest fires in Siberia and North America fell on Greenland’s bright white snow and ice in the summer of 2012. Combined with record-high temperatures, the ash kicked the ice sheet’s annual summer melt into overdrive, researchers report.

The massive melt in 2012 was the first time researchers saw stunning blue surface water ponds in the high altitudes of central and northern Greenland (up to 10,000 feet, or 3,100 meters, above sea level). Similar island-wide melting hit a handful of times in the past 1,000 years, ice layers show.

Thousands of anchovies turned up dead in Southern California’s Marina del Rey over the weekend after suffocating in the harbour, state officials said.

A fish die-off like this hasn’t been seen in recent memory at Marina del Ray, a coastal community just north of Los Angeles International Airport.

The anchovies most likely became trapped in the harbor and died of oxygen depletion, investigators with the California Department of Fish and Wildlife said. 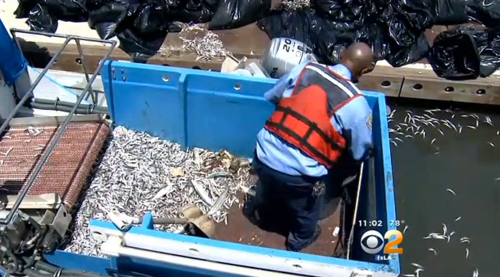 On 15 May 2014, the National IHR Focal Point for the Netherlands notified WHO about a second laboratory confirmed case of MERS-CoV infection in the Netherlands. The case was discovered during the national contact investigation, performed in relation to the first MERS-CoV case in the Netherlands reported on 14 May 2014.

Kilauea (Hawai’i): After a week of many changes here on Kilauea, summit tilemeters recorded slowing inflationary tilt. The summit tiltmeters recorded the start of inflationary tilt at 6:30pm on Saturday May 17th – this suggests that the unusual deflationary tilt recorded since May 10 may have been a DI tilt event that totaled almost 8 microradians before the tilt switched. Because of this deflationary tilt the lava lake dropped around 20m (65ft) is has stabilized at 58m (191ft) below the floor of Halema’uma’u crater. There were 3 days last week that over 100 earthquakes were recorded at the summit of Kilauea each day! Along the East Rift Zone at Pu’u ‘O’o minimal activity was recorded. Most of the flows on the crater floor stopped or slowed, however over the past 48 hours the activity to the Northeast and South of the cinder cone gained momentum.