Bulgaria – The Black Sea town of Varna has received the equivalent of a month’s rainfall in 24 hours. At least 10 people have died and several are missing after torrential rain and heavy floods hit eastern Bulgaria. Floodwaters in Varna surged up to 1m (3.2ft). Many residents had to be rescued as cars were swept away. Hundreds have been left without electricity or food. There have been hailstorms and heavy rain in several parts of Bulgaria in recent days. Forecasts say the extreme weather is set to continue. More bad weather is forecast for the end of the week.

USA – Heavy rains have caused flooding in Minnesota, Illinois, Iowa and in the interior of Alaska.

Great Lakes Are Ice-Free at Last

After seven chilling months across the North American Great Lakes, winter’s grip on the region has finally ended.

With only days before the official start of summer, all five lakes became clear of the ice, which at one point in early March covered more than 92 percent of their combined surfaces.

That was the second-highest coverage on record, according to the Great Lakes Environmental Research Laboratory.

Temperatures in the 80s helped finish off the few floating chunks that remained after the more than 2,000 hours of ice-clearing efforts by the U.S. Coast Guard this spring.

The last surviving chunk was on Lake Superior, near Marquette, Michigan. 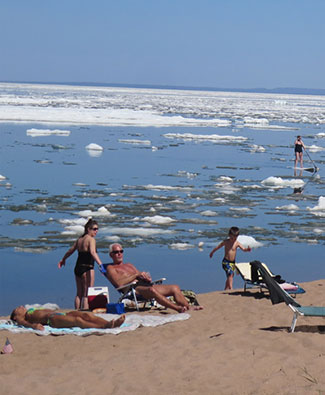 Stromboli (Eolian Islands, Italy): Towards the end of May 2014, activity at Stromboli volcano strongly increased as the magma level inside the conduit rose considerably.