Denmark – During the passing of Storm Alfrida over Denmark these past two days, its potent winds were of secondary concern to some citizens. The low pressure system also led to significant flooding, particularly in the southern part of the country, where water levels in some areas reached 1.7 metres above normal. Bagenkop on the island of Langeland saw the highest water level increase at 1.72 metres – a level that has only been reached once in the town since registrations began in 1976 – while a number of areas saw water levels reach 20-year highs.

An invasive Asian hornet that has decimated bee populations and killed some humans across the Iberian Peninsula will now be attacked by a fleet of armed drones. Experts are teaching local firefighters how to fill drones with insecticide, then fire the payload into hornets’ nests.

The pest is native to China and has spread southward into Spain at about 20 miles per year since arriving in France two decades ago. Its territory is also expanding elsewhere across Europe.

Stings from the aggressive hornets have killed two people so far in Spain, and the numbers of honeybees and butterflies have plummeted there since 2010.

Increased episodes of severe weather are causing populations of some species around the world to fall, and have even brought on local extinctions, scientists warn.

“The growing frequency and intensity of extreme weather events such as cyclones, droughts and floods is causing unpredictable and immediate changes to ecosystems,” researcher Sean Maxwell of the University of Queensland said.

Writing in the journal Diversity and Distributions, Maxwell and colleagues say that birds, fish, plants and reptiles are under the greatest threat from stronger and more frequent cyclones. Mammals and amphibians are said to be among the most threatened by drought.

But the scientists point out that all kinds of plants and animals can be affected by the weather extremes.

Sometimes, at sunset, the sun appears to suddenly and briefly change color. Blink, and you’ll miss it.

A green flash is a phenomenon in which part of the sun appears to suddenly change color for about 1 or 2 seconds. The brief flash of green light is seen more often at sunset than at sunrise.

This fleeting spectacle is caused by the refraction of sunlight, which is particularly significant at sunset and sunrise, when the light travels through more of the Earth’s atmosphere. The atmosphere bends the sunlight passing through it, separating the light into its different colors, much like a prism bends and splits sunlight into rainbows. 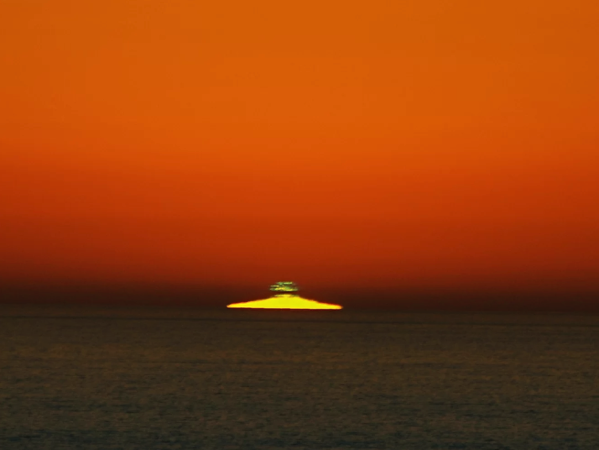 The week’s coldest temperature was minus 58.0 degrees Fahrenheit (minus 48.9 degrees Celsius) at Oimyakon, Siberia.

An out-of-control bushfire is raging through a popular tourist destination after lightning struck in Tasmanian wilderness in the midsouth of the state, around an hour from Hobart. Total fire bans are in place across the state as temperatures soar. The Maydena, Tyenna and National Park townships are under threat as a fire around 8,800 hectares in size blazes just 20km away in the northwest.

A number of homes were destroyed by a wildfire around Betty’s Bay and Pringle Bay in the Western Cape. It’s suspected that two flares were set off just after midnight on Tuesday, igniting a fire in the Kogelberg nature reserve. Strong winds fanned the flames and the fire reached Pringle Bay. Residents of Pringle Bay were evacuated early on Thursday morning when the fire jumped the R44 into the coastal town. One person is reported to have died during the panic, allegedly of a heart attack.

The Panama Ministry of Health has reported an increase in cases of hantavirus infection in Los Santos Province, Republic of Panama, to the Pan American Health Organization / World Health Organization (PAHO/WHO). Between 1 January and 22 December 2018, a total of 103 confirmed cases of hantavirus have been reported. 51 cases were classified as hantavirus fever1 (HF) without pulmonary syndrome and 48 cases were classified as hantavirus pulmonary syndrome2 (HPS), including four deaths.

The Sindh Malaria Control Program reported 108,262 lab-confirmed malaria cases in 2018, according to a Pakistani media report today. Fortunately, no fatalities were reported.