Scientists say they have begun to experiment with a type of fungus that feeds on radiation around Ukraine’s crippled Chernobyl nuclear power plant and shows promise of protecting humans and equipment from radiation.

While Cryptococcus neoformans has been known to science for more than a century, it was only recently found to have properties that can block radiation.

The fungus contains melanin that absorbs radiation and turns it into chemical energy. It can also decompose radioactive materials such as the hot graphite debris from the Chernobyl blasts.

Astronauts aboard the International Space Station recently received samples of the melanin derived from C. neoformans and are testing to see if it can protect against radiation in space.

Cracks in a dome built over a crater left by a 1958 nuclear blast in the Marshall Islands may now be leaking radioactive contamination around Enewetak Atoll.

The Runit dome was built by the United States in 1977, designed to also contain radioactive debris from other nuclear tests in the Pacific between 1946 and 1958. But the new cracks and rising sea levels threaten to inundate the atomic dump, further contaminating the Pacific atoll.

Some of the Enewetak residents evacuated before the blast were finally allowed to return in 1980 after the dome was completed and the Marshall Islands government accepted the U.S. cleanup efforts as final.

Climbers venturing to the summit of Mount Everest and back are exposed to a dose of cosmic radiation five times higher than that received by British nuclear power plant workers each year, according to new research.

In a report published by the Society for Radiological Protection, measurements gathered by mountaineer Bob Kerr indicate the dose received from an Everest ascent brings a 1-in-10,000 risk of developing a fatal cancer later in life.

The exposure is due to cosmic rays not being filtered out by the thin atmosphere at the highest elevations of the mountain.

“If someone received this level of dose at ground level, and if it was not due to cosmic radiation, then under the UK’s Ionizing Radiations Regulations, this would be classed as a ‘significant dose’ and would be at the annual public dose limit,” said Kerr.

But since Sherpa guides climb Everest many times during their lives, their exposure is likely to be far greater.

Kerr concludes that most guides and climbers are likely to be unaware of the radiation exposure they receive on the world’s highest mountain. 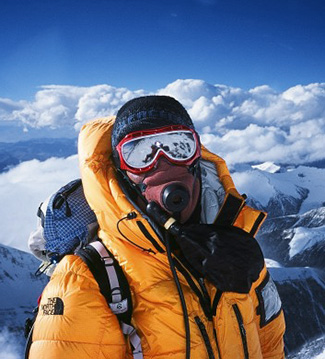 Since the Tohoku earthquake and tsunami crippled Japan’s Fukushima Daiichi nuclear power plant in 2011, concerns have spread among the public that water with traces of radioactive material might be traveling in a plume across the Pacific Ocean toward the west coast of North America.

Experts say the radiation levels reaching the U.S. coast and Hawaiian Islands will be too low to threaten human health or marine life, but no U.S. government or international agency is actually monitoring radiation in these places.

Now, a scientist at the Woods Hole Oceanographic Institution (WHOI) in Massachusetts is launching a new citizen science project to measure levels of radioactive cesium in water washing up along the West Coast.

Earth’s upper atmosphere is still littered with radioactive particles from the more than 500 above-ground nuclear tests that took place decades ago, according to a new Swiss study.

Most of the plutonium and cesium isotopes from those blasts have since been rinsed out of the lower levels of the atmosphere by falling in rain or snow, or by being brought down by gravity.

The stratosphere was also thought to be relatively fallout-free before the Swiss team found its contamination to be about 1,000 to 1,500 levels higher than in the troposphere, the layer just above the surface.

Jose Corcho of the Swiss Federal Office for Civil Protection told AFP that the contamination probably poses no danger to humans, and is “comparable to the levels measured at ground level air at the end of the sixties and in the seventies.”

“Most of the radioactive particles are removed in the first few years after the explosion, but a fraction remains in the stratosphere for a few decades or even hundreds or thousands of years,” said Corcho.

The study, published in the journal Nature Communications, used aerosol samples taken by Swiss military aircraft over the past several decades.

A previous study, conducted by the U.S. Centres for Disease Control and Prevention and the National Cancer Institute, concluded that nuclear fallout from atmospheric testing might have led to approximately 11,000 deaths, mainly from thyroid cancer. A huge solar flare erupted from the surface of the sun late Sunday (May 12), followed by an even more powerful blast less than 24 hours later. The solar eruptions are the most powerful ones seen so far this year.

Sunday’s flare unleashed a wave of plasma and charged particles, called a coronal mass ejection (CME), into space. While the CME was not directed at Earth, the weekend flare triggered an hourlong high-frequency radio blackout, according to the Space Weather Prediction Centre, which is managed by the National Oceanic and Atmospheric Administration.

When they are aimed directly at Earth, X-class solar flares can interfere with satellites in orbit and communications infrastructure on the ground. Powerful sun storms can also be hazardous to astronauts living aboard the International Space Station.

On Earth, solar eruptions can cause radiation storms that intensify normal aurora displays (also called the northern and southern lights) for skywatchers at high latitudes.

Solar activity ebbs and flows on an 11-year cycle. The sun is currently in an active phase of Solar Cycle 24, which began in 2008 and is expected to peak later this year.